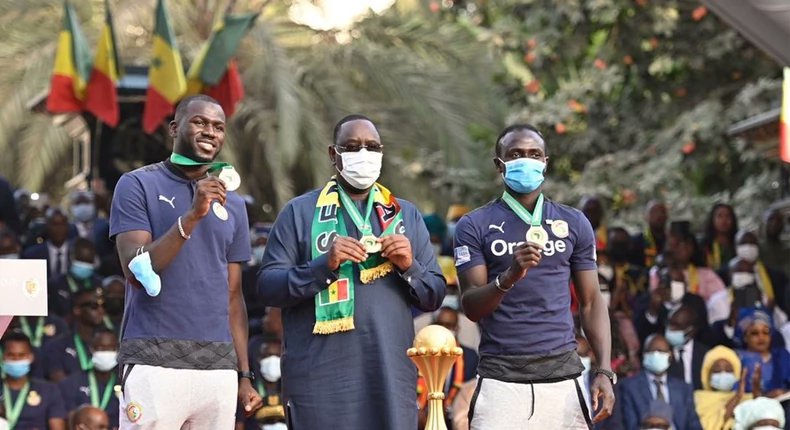 His Excellency Macky Sall on Tuesday awarded the men’s national football team acres of land and cash prizes after beating Egypt to win the 2021 AFCON.

In a ceremony in the presidential palace in the capital Dakar, he also appointed team members to the country’s prestigious Order of the Lion.

President Macky Sall announced the package when he met the African Champions at the presidential palace on Tuesday.

“By your vital force and your creative genius, you have reversed the course of history,” the president said.

“We dreamed of the cup, you built this dream and you made it come true, ” he added as excitement filled every atom of his body.

The president further urged the head coach Aliou Cisse to lead the team to the semi finals of the 2022 World Cup which will be held in Qatar.

The Teranga Lions defeated the Pharaohs of Egypt in a 4-2 penalty shootouts in Sunday’s final in Cameron after a goalless draw encounter in regulation time.

Sadio Mane after missing a penalty in the 7th minute stepped up to take the last kick which eventually handed Senegal the win.

The triumph marked Senegal’s first ever AFCON success after attempting for over fifty years.

Senegal will meet Egypt again in March for the World Cup playoffs in a two-legged encounter.