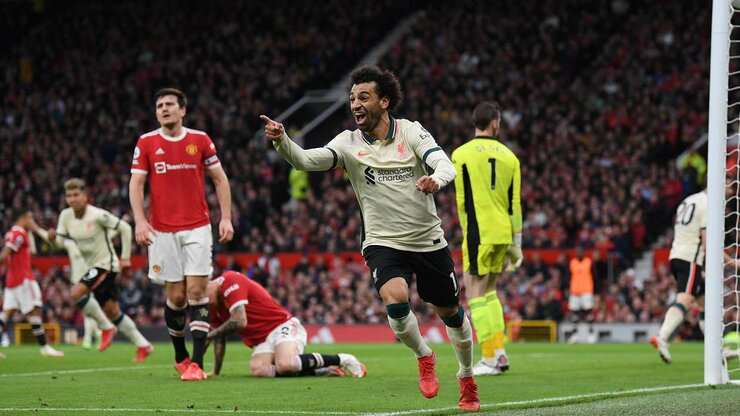 History was made at Old Trafford as Liverpool recorded their biggest ever win against Manchester United, and Mo Salah became the first visiting player in Premier League history to score a hat-trick against United. The visitors were 4-0 up by the break, and further added to the misery after HT, as Jurgen Klopp’s side heaped huge pressure on ‘Red Devils’ boss Ole Gunnar Solskjær in the 5-0 drubbing.

Liverpool, who survived an early scare when Bruno Fernandes lashed wildly off-target, made the perfect start as they raced into a 2-0 lead within thirteen minutes. Naby Keïta got the first, passing into the back of the net after being teed up by Salah, before Diogo Jota slid in at the back post to convert Trent Alexander-Arnold’s cross.

As hopeless as United’s defending was, they still posed a threat going forward, with United’s best chance coming from a stinging Mason Greenwood shot on goal, but Alisson was on hand to sharply save the effort. That was just a breather for the ‘Red Devils’ backline though, as Salah added a third and fourth before the break, firstly finishing from Keïta’s front post cross before being criminally left in acres of space and tidily finding the bottom corner from inside the area.

Ole Gunnar Solskjær and his United side were booed off at the break, with hundreds of fans not even bothering to return to their seats after HT. Those who remained saw Salah net his third when he clipped over de Gea from inside the box to make it 5-0 within five minutes of the restart. To further rub salt into the wound, Cristiano Ronaldo had a consolation goal ruled out for offside and then substitute Paul Pogba was shown a straight red card, upgraded from a yellow after VAR intervention, for a horrific challenge on Keïta that resulted in the midfielder being stretchered off.

De Gea superbly prevented Alexander-Arnold from adding a sixth, tipping a fierce 25-yard shot over the bar, whilst Edinson Cavani summed up United’s afternoon by somehow hitting the bar from inches out. The result sees Liverpool leapfrog Manchester City and into second place in the table, one point behind Chelsea in the title race, and seven clear of United who are seventh.